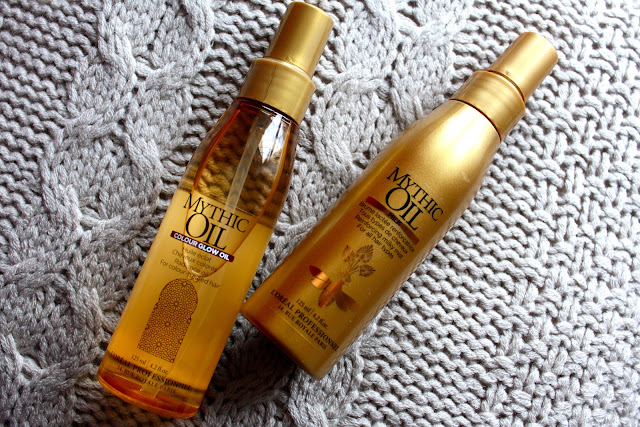 Don't get me wrong, I am a massive fan of the holy-grail of hair oils, MoroccanOil, but recently I've started to tire of it. Whether it's the medicine like bottle, or the scent, I just feel like changing things up a bit. This is where I introduce Loréal Professionnel's Mythic Oil Colour Glow and Mythic Oil Milk. One word: Amazing. I love them both. Without rambling on and boring you about the benefits of hair oils, we all know how they protect the hair, nourish the hair, stop flyways and frizz...I will just say that these two are right up there in the world of hair oils. So many brands do their own versions... serums, oils, leave-in conditioners. Effectively they're all very similar, but I often find that a lot of them tend to just coat the hair and leave it feeling quite heavy and greasy...not desirable at all really. The Mythic Oils do exactly what you want while staying light and non-greasy. They're in spray form rather than pumps, so already it you're working with a lighter, thinner liquid, making it much easier than some of the thicker, more gloopy ones.. MoroccainOil being one of those culprits. I've been using them non-stop for a couple of weeks now and they've been a staple in my hair routine, leaving it noticeably silkier and more healthy looking in terms of colour and strength.

Now, you're probably thinking, why have both? Well, I'll be honest and say I couldn't decide between the two, and they're also very different. The Oil Colour Glow is aimed at colour-treated hair which can only be a good thing and contains linseed oil and cranberry oil, whereas the Milk contains royal jelly and passionfruit seed oil and intended for all hair types. For me, they both achieve the same effect, but my preference lies with the Milk purely because I believe it has a slightly nicer scent. The Milk does get used up quicker though because you are recommended to use more sprays than the Oil, but if you only want to buy one, you'll be happy either way. The Oil is definitely more of traditional hair oil, but I just find the Milk feels more creamy and luxurious as well as being a little less greasy to the touch than the Oil for obvious reasons, of course. Not forgetting the original Mythic Oil, there is plenty to choose from, as well as the range continuing into shampoo and conditioner! So have a browse, check out the ingredients and see what's best for you. For now, it's move over MoroccanOil and hello Mythic magic!
Posted by Unknown at 00:00